Many thanks to Gaby Grace (our longest-serving trustee) for this introduction to the origins and early history of The Shared Earth Trust at Denmark Farm:

It all began in 1984 when Barbara and Neil Taylor bought Denmark Farm and suffered deep disappointment at finding no blackberries and hearing no birdsong. A soil expert told them they should poison the moles which were damaging the grass and Barbara found herself replying ‘No, we couldn’t do that; it’s their farm as well as ours. They were here before us and they’ve got to make a living too’. That thought grew into a conviction that the land – the Earth – is shared and they began a programme of reversing the destruction of wildlife habitat which had taken place. So in 1987 the Shared Earth Trust was born to establish and run a long-term conservation project at Denmark Farm – a ‘haven for wildlife’. 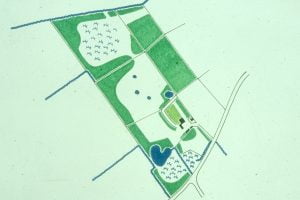 The founding Trustees were Doctors Anthony and Maggie Barker and during the first four years the work developed almost entirely through volunteers like them who gave time and money. The vision was to bring back the common species which ought to be found on any piece of farmed Welsh countryside – blackbirds, robins, bluebells, primroses, small tortoiseshell and common blue butterflies. The results were spectacular! In 1985 only 15 species of bird bred on the farm – by 1994 this had risen to 48 species. This was a pioneering case-study in what could be done anywhere; turning a ‘green desert’ into living countryside. Tragically the Barkers were knocked off their tandem and killed in 1993 but two years later the Barker Memorial Centre was opened. Then in 1997 the Trust took over ownership of the farm and work began on converting existing out-buildings into an education centre and dormitory. 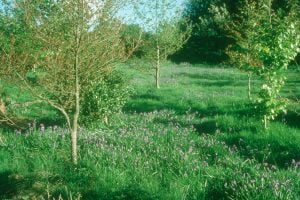 Some progress during the early years

One purpose of Denmark Farm was to establish a better relationship between food production and biological diversity; conservation and making a living have to go hand in hand. The vision was that all farms might have a ‘little bit of Denmark Farm’ somewhere – an idea well ahead of its time. Through all this there has always been a profound respect for wildlife and an awareness of a spiritual dimension; human beings are part of the natural world, interlinked and interdependent. And that striving for real health – physical, mental and spiritual – still undergirds all that we do.

Read more about the history and development of Denmark Farm.

Give a gift that gives twice Sponsor a Bird Bird at Denmark Farm.

This site uses Akismet to reduce spam. Learn how your comment data is processed.

Our Eco Lodge provides comfort and sustainability for holidays immersed in nature.

Please make a donation to support our work

Become a Member of The Shared Earth Trust